Only 1 left in stock

In Cacahoatán, meaning “place of cocoa”, a small plantation was established in the early 1900s. Andalusian immigrant Moisés Mugüerza Gutiérrez called the plantation Finca La Rioja. Don Moisés planted coffee, various crops and cocoa there. The cocoa he planted were Criollo cocoa varieties. He had collected these in the south of Mexico, Belize and Guatemala and developed them further in his nursery. Unfortunately, for Don Moisés, agricultural reform policies after the Mexican Revolution expropriated much of the plantation and nursery.

Vegan, soy and gluten free. May contain traces of lactose and is made in a factory that does not process peanuts and nuts.

From the age of 14 I have worked in pastry shops, chocolate shops and I have taken care of the patisserie in various restaurants at home and abroad with one to three Michelin stars. Chocolate has always been a common thread in my life. You made the distinction by what flavor you added or what kind of decoration you made of it. But it always started with melting a bag of factory chocolate.

In 2011 I decided to buy cocoa beans and make the chocolate myself. Now I could select the cocoa that makes me excited. The craft of making chocolate is therefore in the entire process; the choices you can make in roasting the cocoa and the specific flavors you can develop or accentuate by, for example, letting the acids evaporate a bit more. And the choices of rolling the chocolate where you can determine the fineness, structure and mouthfeel.

Over the years I have developed my own style of chocolate making. Every bag of cocoa is different, every new crop is different from the previous crop. My challenge is to get the best out of the cocoa bean every time to make the most beautiful chocolates. What I have realized over the years is that I actually do very little to influence the taste. The trick is to harmonize the beautiful cocoa and leave it in its value. My style is to stay as close as possible to the taste profile of the origin and to accentuate what makes the cocoa bean unique. This is my passion and I am proud to share it!

After two years of learning and making, through trial and error, I said goodbye to my other patisserie label and I have fully focused on the craft of chocolate making. Krak was born in 2013! I make the chocolate in our factory in Ermelo together with my partner who manages production and operations. Together we ensure that Krak becomes an increasingly transparent company and that everyone can enjoy a piece of good chocolate. 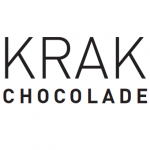