Spices roasting over a wood fire

At his favourite pho stand near Marou’s workshop, co-founder Samuel was inspired by the smell of spices roasting over a wood fire; a delicious blend of cardamom, star anise, coriander, cinnamon and cloves. Each of these five spices at the base of pho combines perfectly with cocoa, their mixture offering an incredible spectrum of flavours.

This bar was awarded Silver in the International Chocolate Awards, Asia-Pacific Bean-to-Bar competition 2021-22

Vincent Mourou left a successful advertising career in San Francisco to find himself in Vietnam. Instead, he found Samuel Maruta, a recovering banker living in Saigon with his wife and two kids. During a camping trip in the jungle in 2010, they quickly decided to make a break for it. After googling “cacao plantation” Sam and Vincent set course for a farm in Ba Ria Province with no address. On the ferry ride back to Saigon, they vowed to start a company called Marou Faiseurs de Chocolat. Armed with nothing but a blender, an oven, and cake tins—they got to work in Sam’s kitchen. Marou rely on a tight network of small farmers from whom they buy the best beans, one bag at a time, for a premium price. Marou roasts this cacao with care so you can taste their hard work and the terroir of each provincial origin. Marou Faiseurs de Chocolat was among the first “bean to bar” concerns in Asia and one of the few in the world to make chocolate at origin. What began as a dream for two wayward Frenchmen has snowballed into a brand of pure dark chocolate entirely made from Vietnam’s finest ingredients. 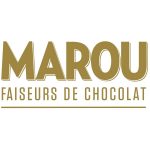 Refer to ‘Additional Information’ for allergens